Our Discussion & Visit with Hank on "Say No More" 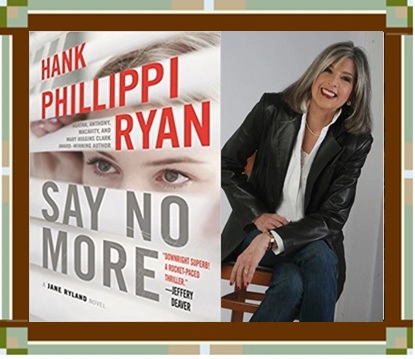 Last Thursday, MAF members and Lisle patrons got a rare chance to see one of the mystery world’s most generous and lively authors, Hank Phillippi Ryan, in action. Not only did she fully participate in discussion of her book Say No More, she answered interspersed questions about novel writing, stories behind some of the scenes in the novel, and how she handles her highly-awarded careers as both TV journalist and mystery author.

One of her remarks that struck home with both writers and readers in the audience, was how her story process isn’t to use her investigative reporting situations as the basis of a specific story, but more that her body of experience in this profession informs her mystery author side and keeps the fictional writing authentic.

This blending of the realities that she employs in the stories with her journalistic observations results in rich content for readers. We asked about how she pursued the reality of campus sexual assaults, its survivors, and perpetrators. Hank scrupulously researched the facts on the current state of this issue and we talked about how complex it is and how hard it is to be balanced about hearing both the victim’s side and the fact that there are men who are falsely accused. In the story, Jane’s producer for the documentary they are making on this subject, is visibly unwilling to include this aspect in their film.

Hank also addressed the always thorny issue of having to interview people at their lowest point, when they’ve endured a traumatic event. She was very good at articulating the conflict of these situations: how as a reporter, you want to cover every aspect of a story, and create an opportunity for the victims and their families to speak out, and that in talking with them, she’ll address how what they have to say could help others, both in solving the crime and in connecting with others who have been through similar situations. At the same time, she expressed disapproval of the reporters who ask the infamous how does (this situation) make you feel?

Attendees were also interested in how she’s handled the timeline in her Jane Ryland series to allow the character’s developing relationship. She pointed out that Jane and Jake have been featured in now five books, stretching from 2012 to 2017, but they have known each other for a much briefer amount of time in the series’ time frame. This allows Hank to be just as surprised by whatever direction the characters will go in the future. It is also a canny way to keep us guessing about what the future holds for them!

The writers among us – which included Marcella Raymond from WGN news! – also appreciated Hank’s comments on her writing process and her and her honesty in answering “how does she do it all”. Hank shared that from the time she decided to write a mystery, (inspired by the thought that her spam mail could be used to cover up a crime), she and her husband stopped having dinner parties and that all of her vacation time is devoted to writing and mystery events. These are just part of the sacrifices she mentioned that showed how dedicated writers need to be, to get ahead in the current age of publishing.

We told her how we appreciate the fact that her sub-plots are always engaging and fleshed out so well. Hank told us that these are some of her favorite characters, and that having the chance to fully explore them helps to balance out the very incremental things she can write about her series’ main protagonists. The series characters have to have places to grow beyond an individual story, while the characters involved in a single book can have complete story arcs.

Everyone gave her a hardy round of applause and partook of the Staked Cake. (Picture coming soon!) Yet another Ryan Triumph at Lisle Library!