Our Book Discussion on: "Omens" by Kelley Armstrong For Murder Among Friends’ March meeting, the Omens were not only good, they were fantastic! This would of course be the suspenseful, otherworldly novel by New York Times bestselling author, Kelley Armstrong – who is once again dabbling in the crossing of mystery with (possible) magic. It is also the first book in what looks to be a very successful series.

Omens introduced us to the story of Olivia Taylor-Jones, who isn’t the upper-class Chicagoan she thought she was. In fact, she learns that she was adopted after her birth parents were arrested as serial killers. It is also the story of a seemingly normal, rural Illinois town called Cainsville – which is really anything but normal. Its residents also seem to have strange ideas, quirky eccentricities, and of potential powers that extend to wildlife such as the flock of ravens in town and a mysterious cat who adopts Olivia despite her denials of ownership.

Murder Among Friends conducted its own magic – and author Kelley Armstrong generously called in (from Canada!) to join our discussion on the book. Between author and readers we shared the many things we liked about this story as well as points where we had questions. One of our new members kindly brought along her copy of the March 6th issue of the Chicago Tribune for its article on “Kaneville”, wondering if it is the town Kelley based her Cainsville on. This inspired other members to pull out their smart phones and see what Google had to say about towns named Cainsville. We found a Cainsville, MO and a Cainville, IL near Vandalia – but Kelley set us straight: none of these were her Cainsville: but we got points for creative research! Her Cainsville was inspired by a sign she saw in Canada – for a great author, that’s all it takes to get creative plotting going.

We asked her about some of her other research for the book, in particular, how she’d gone about getting the details for a motorcycle club. We’d heard they were hard to investigate, and Kelley agreed. She shared that she has a friend who was very well versed in the motorcycle club culture and she picked his brain for the details she needed for the story. She also shared some of her creative process in working with the superstitions and mythologies that occur in Cainsville. When asked if these were pre-existing myths and figures or did she make them up, Kelley essentially responded “yes”. ;-)  Kelley has researched countless myths, legends, and paranormal beings, using some outright, and creating beings and myths of her own. When asked, she told us that her character Gabriel, does not get his name from the angel, but from myths about the Gabriel Hounds, which are part of Celtic mythology about The Wild Hunt. (Author Mary Stewart has a book called "The Gabriel Hounds" which we can get through Inter Library Loan.) She has a lot of fun doing this, and has always done so from her early (school) works that dismayed teachers, but led her to the ever-expanding fandom her published works have established.

Before ending the call we had two other character questions we had to ask: will we meet significant, new people in Cainsville in the next book(s), and is Margie going to be ok? She laughed with us sympathetically over Margie, and let us know that the next book does actually say something that lets readers know she is ok. Kelley would not be tricked into telling us who, but there are a couple of new characters in the second book, Visions, which we have in the mystery collection. 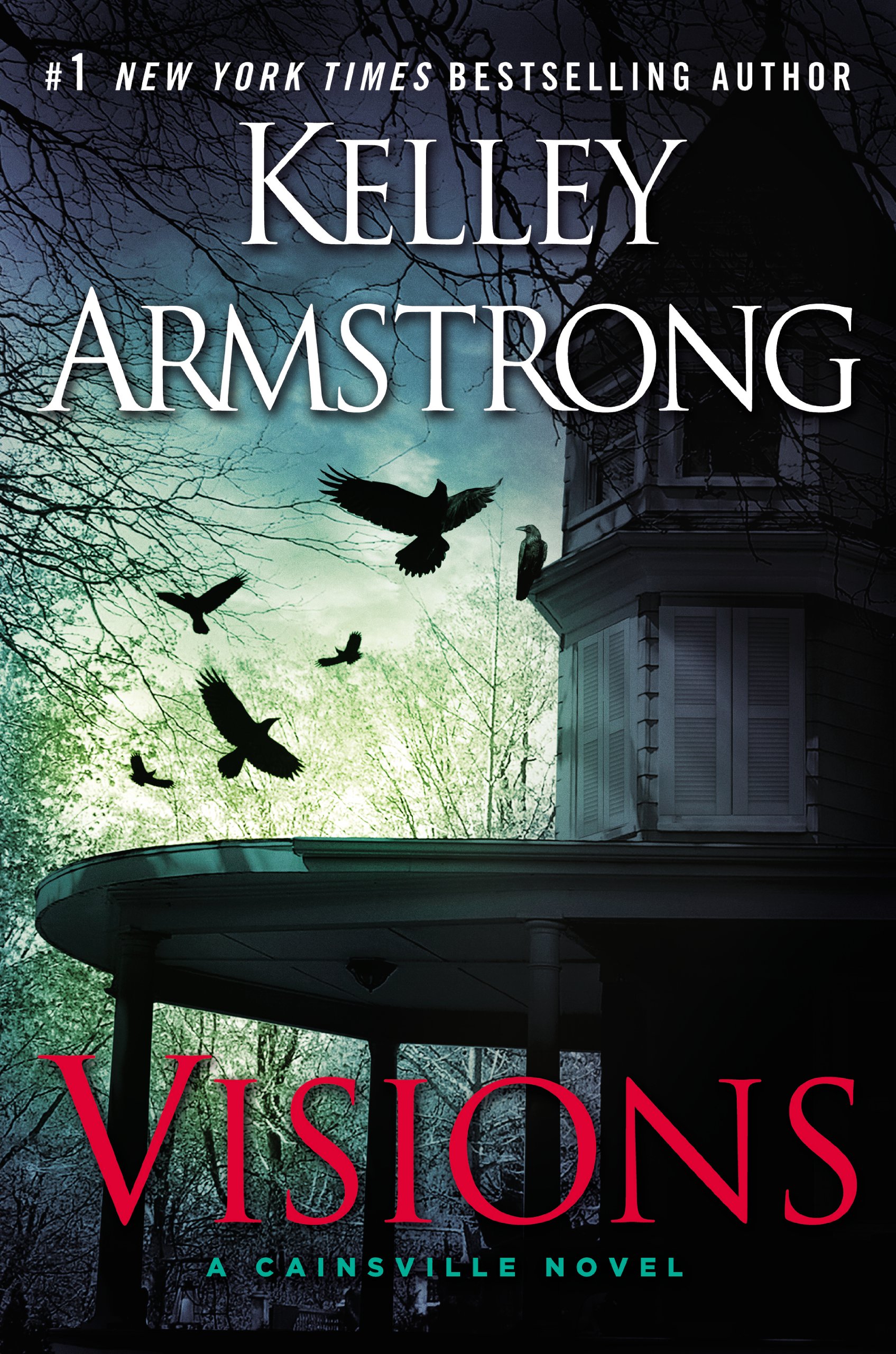 to go to our catalog copy & reserve it! (The third book Deceptions, will be out in August 2015.)

We gave Kelley a hearty round of applause – and the group’s highest book rating so far this year!

Click here for a direct link to the Omens Cast of Characters page.